I’ve never regretted the decision to study journalism, but my future in the media is far from decided. Luckily, the studies in journalism at NLA Mediehøgskolen Gimlekollen in Kristiansand, Southern Norway, have prepared me for a number of future challenges. 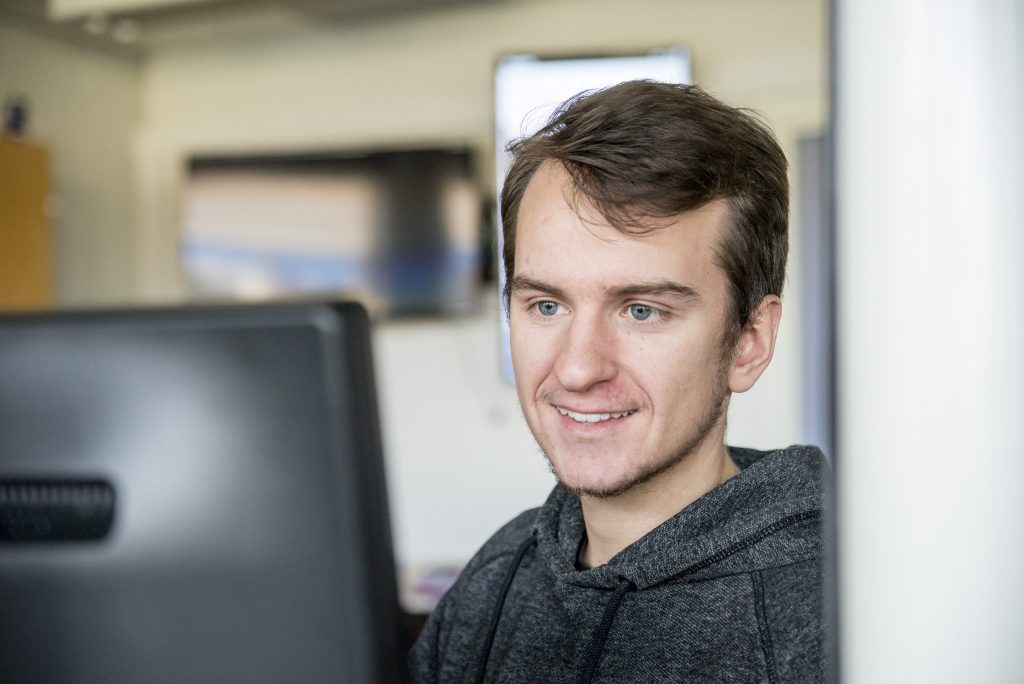 My last year of high school was coming to an end, and I had no idea what I wanted to do. None at all. But I was confident I wanted to keep studying instead of taking a year off, which more and more high school graduates decide to do these days.

However, I always found my dad’s job interesting. He’s been a journalist his entire life, and today he is the editor-in-chief of the Norwegian newspaper Dagen. At times it could seem a bit stressful though. Work calls would come even in weekends, often when you the least expected them, and away he went blabbering about front page headlines and sentence structures.

But studying journalism was something I began to consider more and more. I’ve always had a big interest in news and media, and as a child I often watched the evening news together with my parents. We are a family who likes to voice our opinions, and family dinners often became the stage of discussions and debates.

After discussing with my dad, I decided to join him on a visit to NLA Mediehøgskolen Gimlekollen, one of Norway’s most reputable journalism schools. There I made my decision: this was the place I would spend my next three years.

After the first few weeks as a new student at Gimlekollen, I quickly noticed how great the student environment is here.

It’s a relatively small school, and my class consisted of about 40 students, which makes  a group of people where you can get to know everyone a little bit. Another benefit is that the lectures at such a school are very personal and informal, and interrupting the lecturer to ask questions is actually encouraged. The teachers at the school are great, as well, and they all have experience from different subfields in the world of media.

The highlights of the studies so far include the internship periods, where we take on the roles of different editorial staff and produce content for the school’s own media platforms. Gimlekollen is a very practice-oriented school, where large parts of the study involve working as a journalist.

In most of the courses you are graded by the quality of your work, in addition to a report where you explain the thought process behind your work. The experience you acquire throughout the entire course is invaluable, and it really prepares you for a media reality which is varied and rapidly changing. We’ve also had authentic real-world practice, where I spent two months as an intern at Norway’s largest tech website Tek.no. I was given trust and responsibility from day one, and it was easily the most fun I’ve had during my years as a student.

Of course, the theoretical subjects are just as important. At first I was a bit surprised about how much attention these subjects were given to. Nevertheless, learning about ethics, politics, social studies, economics, history, and how these relate to the media has been really rewarding. Even better, practical work is still a part of these subjects, as well, where we would visit city council meetings, court trials and other excursions. Talented guest lecturers are also part of almost every topic, and you end up hearing interesting stories and learning a lot.

Gimlekollen is also the only Nordic school which offers worldview journalism as a mandatory subject, which is something that sets it apart from other schools. Excursions to the local church and mosque gave us students the opportunity to ask questions and learn a lot about these communities, and it was very insightful.

A new reality for journalists

I still have a year left here, and I really appreciate all the knowledge and experience I’ve gained. As a freelancer for the local newspaper, I’ve covered all types of journalism: from local sports and cultural events to deep political and religious matters. Finishing and publishing a journalistic piece you are satisfied with is a great feeling. It is also a real privilege being able to tell important stories, and actually have the chance to make a change with your work.

All is not good with today’s press though. As a newly educated journalist in today’s media situation, you have to be prepared for new challenges every day. Even though I have a huge interest for media, I often find myself getting annoyed over today’s press. The public debate between politicians and other voices in society is often ridden with personal remarks and insults, and the tabloid media love the opportunity to make a negative article or clickbaity headlines.

Today’s press’ tendency to stir up negativity and conflict is something I really dislike, and is honestly something that demotivates me a bit from becoming a journalist. The public’s trust in journalists is at an all-time low, and I don’t blame them. I do hope I can contribute to turn that image around.

The author is a 21-year-old journalism student at NLA Mediehøgskolen Gimlekollen.